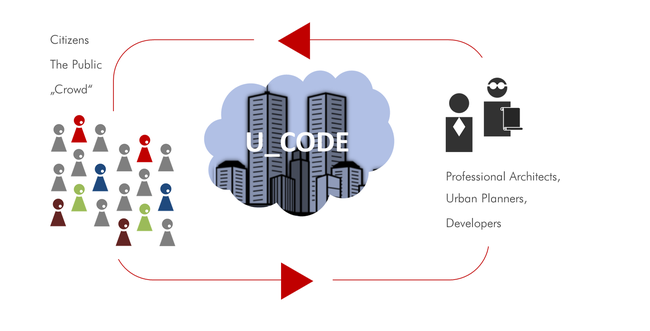 In the future, professional designers will design our cities in close cooperation with the citizenship. Departing from technocratic planning, the shaping of the urban realm will become a democratic process in which all civic stake-holders participate as co-creators and co-designers. From the very beginning of a project, citizen experts will con-tribute their experience, opinions, and ideas, and keep an active voice throughout the design and development pro-cess. Positive public commitment, constructive discussion, and high identification with projects will result this new kind of co-creation.

Different cases of public disagreement in different European countries have shown recently that perusing a thor-ough planning process is by no means a guarantee for a broad public acceptance of an envisioned urban project. The measures already in place to inform the public and collect eventual disagreement are based on classical media and require to lookup plans and project descriptions during the opening hours of municipal offices where those materials are at display. This procedure becomes quite off the perception of today’s citizens more and more. Public planning administration and the public itself need to have a platform for sharing and further evolving projects of common interest in order to perceive each other as partners in a collaborative process. Having this vision in mind, U_CODE aims to be the conceptual, organizational and technical platform for enabling exactly this.

Whereas many tools for e-participation have been developed and tested already in order to involve citizens and large stakeholder groups, there are no digital instruments yet which enable the creative participation of the citizen-ship on a massive scale. This is the challenge for the new co-design environment U_CODE: it enables communica-tion and collaboration between large numbers of citizen and professional experts, and thus ensures a substantially more creative, focused, and secure design process for projects of high public concern.

U_CODE transcends the state-of-the-art in citizen participation for urban design in many aspects. It is at the forefront of urban co-design technology and methodology, due to its functional architecture which integrates new and existing components in a unique way. It holds that meaningful new technology in this field cannot be de-livered if not co-evolved with appropriate methodology how to use and apply it. Before all, U_CODE draws upon state-of-the-art theories and methods of participation, co-creation, user involvement, as researched and applied in the domains of product and service design, architecture and urban planning, and urban development, and translates them into novel ICT. So far, methods and tools for user centered design and co-design were developed in a frag-mented and "solo" instrument way. Still there is only scarce use of this type of methods and instruments in the field of urban planning, although this is a field where these methods and tools could produce immense societal and eco-nomic benefits (see section "Impact). U_CODE aims at filling this gap by delivering a coherent set of method and tools for user centered design and co-design in urban planning.

As U_CODE targets at a new level of democratic urban design processes, it strengthens a fun-damental European attitude of community- and negotiation-based decision making in politics, administration, and civic life. It was argued that the Internet and new ICTs, as they are constituted today, cannot produce meaningful social changes unless their structure evolves in a citizen-centred manner instead of being centred on government and the private Internet-operator companies (Loader & Mercea 2011, MacKinnon 2011). Eventually, contemporary planning practice has recognised the necessity to sense public mood as a decisive factor for the shaping of urban projects. Public mood has become a constraint for design decisions. However, intelligence about crowd sentiment has not found its way into urban design and decision-making processes yet as regards planning tools and procedures.

There are well-established co-design methods for the participation of larger stakeholder groups in urban, architectural and industrial design, but they are mostly hands-on and not ICT based, and involve a rela-tively limited number of participants. As they do not exploit the new opportunities of digital technologies for mas-sive crowd involvement, they do not reach out to large audiences, nor actively involve them. U_CODE tackles this challenge by employing digital web-based tools which are a) accessible to large audiences, and b) attractive and inviting.